In search of scrubland beauty...

As the summer is at its peak, I have no plans for any birding outings and considering temperatures rising to its all-time highest records in last 2-3 decades, it is completely out of question to go out in such a hot conditions. One of my dear friends, asked me if I can accompany him to go to Ela Habitat, near Jejuri. He was supposed to drop a package to Ela Habitat. 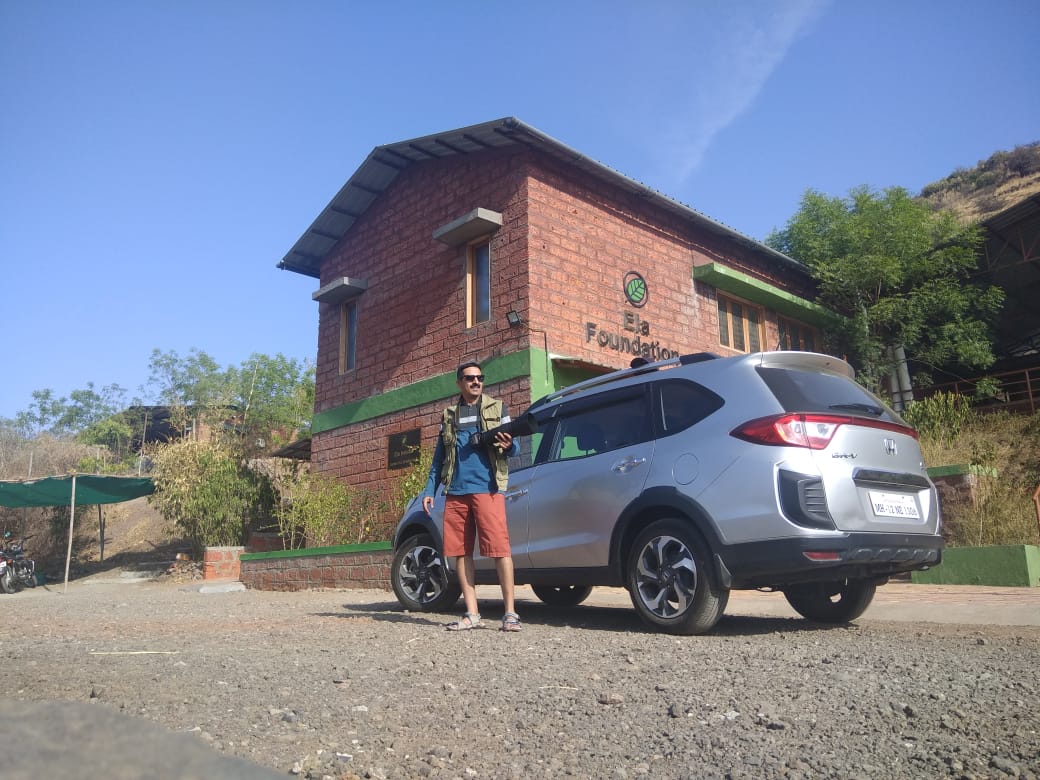 The Ela Habitat belongs to Ela Foundation and is located in the serene surroundings of beautiful mountains in the ecotone of India's two bio-geographic zones: the Sahyadris (a part of the Western Ghats - a global biodiversity Hot Spot) and the Deccan Plateau. Ela Habitat is blessed with bird life and flora representative of both bio-geographical zones. Dr. Satish Pande, is one of the founder trustee members of Ela Foundation. I am also a big fan of his since childhood.
Few years back, I did the Basic Ornithology course conducted by Ela Foundation. That was the time when I met this wonderful Bird-man from Pune, Dr. Satish Pande. I was certain to accept the invitation from my friend, in the hope that I could meet Pande Sir after a long gap. But he made it very clear that it will not be possible to meet him as Pande Sir was not in town. Still I could not deny the invitation and decided to accompany my friend.
Another reason to accept the invitation was, knowing the region to be open scrubland with rocky terrain and low grass, there was high chances of spotting a beautiful lizard, named Fan-throated Lizard. Last year, I spotted one in similar habitat at Mahatma Tekdi, Kothrud. So wanted to take a chance of seeing this beauty one more time. 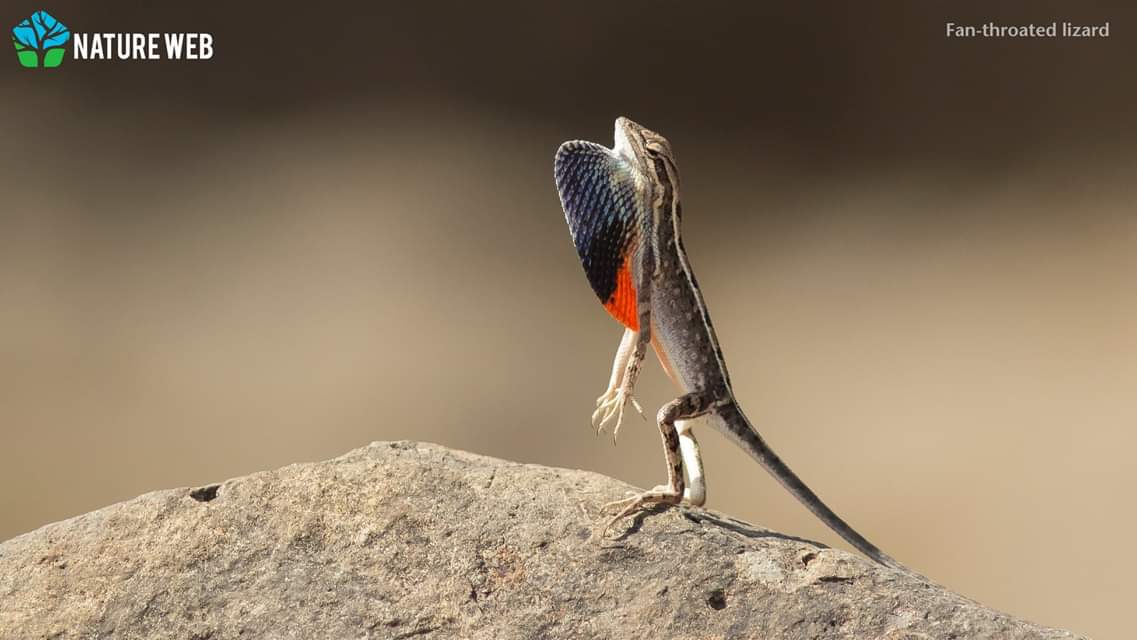 Sitana deccanensis
The distance to Ela Habitat from my place is about 70 kms. We decided to start early at around 5am so that we can reach there before the Sun could start blazing. The route that we took was, Kothrud, Pune - Katraj - Bopdev Ghat - Saswad - Jejuri - Pingori Village. On the way, we took a short break at Jejuri for a cup of tea and continued our journey. Considering the Summer time of the year, we were not expecting too many bird sightings. Still on the way, we saw many commoners like, Spotted Dove, a pair of Grey Francolins, a party of peacocks, Sunbirds (Purple as well as Purple-rumped), Rufous-tailed Larks, Ashy-crowned Sparrow-larks, House Sparrows, Black Drongos and a good number of Laughing Doves. Apart from these birds, we saw a lone individual of a scrubland beauty, Indian Gazelle (Chinkara). 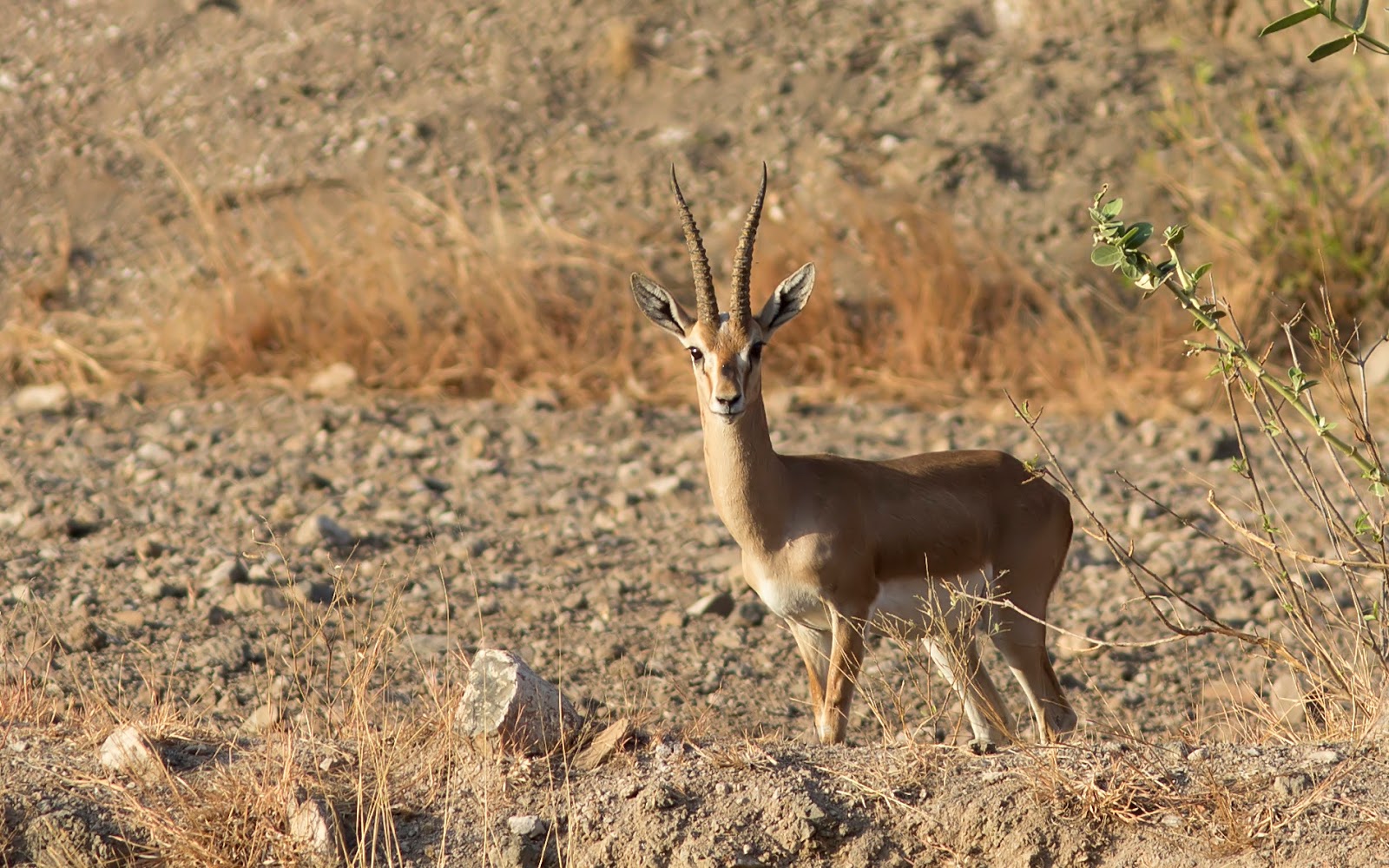 Indian Gazelle feeding on Crown Flower (Calotropis sp.) leaves
Due to summer, most of the bushes were dry. Chinkara was busy eating whatever green leaves that it could find and was least bothered about us being around. After taking some clicks we moved ahead and reached Ela Habitat around 7:30am.
At Ela Habitat, after handing over the package that we carried, we settled down at man-made waterholes to see any bird activity. We saw few more commoners like, Red-vented Bulbuls, Oriental White-eyes, Crested Buntings, Sunbirds, Indian Silverbills, Jungle Babblers, Yellow-eyed Babblers, Grey Francolins, Indian Robins, Coppersmith Barbets, Common Iora, Common Mynas, Indian Blackbirds. In addition to these we also spotted, Indian Palm-squirrel and Indian Grey Mongoose as well. After spending couple of hours and watching the commoners, we decided to head back. But instead of taking the same route, we decided to take a detour (rather a longer route) to explore the area and try our luck with the beautiful lizard.
The route that we took was, Pingori Village - Parinche - Saswad-Veer Road - Saswad. After a few kilometers drive, we spotted this tiny beauty on one of the rocks. We instantly got down from our vehicle with our photography gear. Luckily, the lizard was cooperative and gave us quite a few shots from various angles. 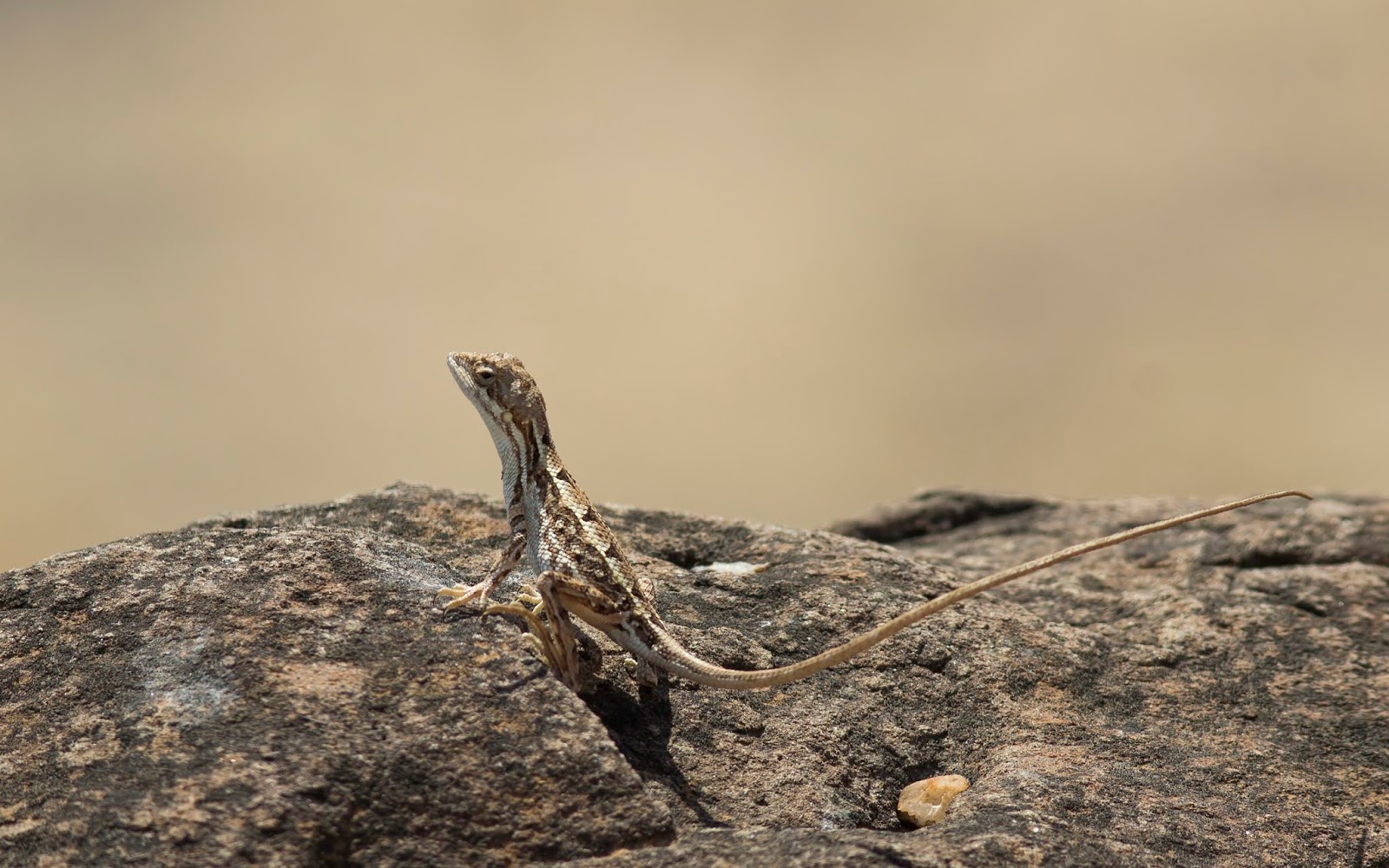 Sitana laticeps
The maximum length this lizard can attain is 8 inches, out of which the tail itself takes 5 inches. So you can imagine, how tough was it to spot such a tiny lizard and that too from a moving car. But my friend, Sachin Pawar, with a microscopic eyesight, made it look very easy. Only thing was, when we spotted it first time, we thought it to be Sitana deccanensis, the one that I saw last year. But when we started taking photos, we realized that it to be different species named Sitana laticeps. A lifer for me. After reading about it on internet, I came to know that Saswad region is a type-locality for this species. 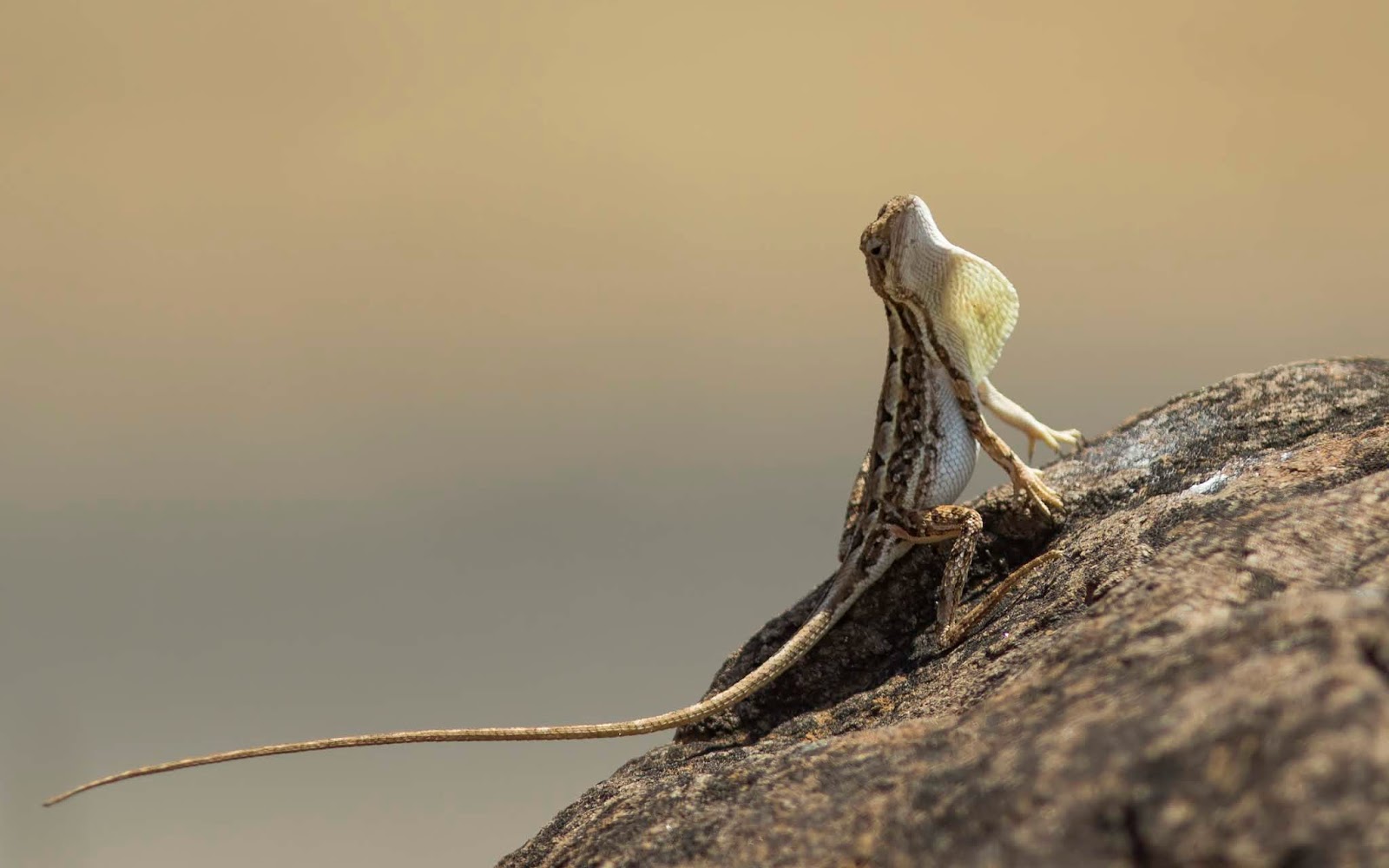 Sitana laticeps showing its dewlap
The striking difference between the two species is the color of dewlap, which is tri-colored (blue, black and red) for Sitana deccanensis. Whereas, for Sitana laticeps, it is white or yellowish in color.

Typical habitat for Sitana sp.
The lizard was so small that it is impossible to spot it for layman. While we were busy lying on the ground and taking eye-level shots of the lizard, the people who were passing by, were almost laughing at us thinking what these idiots are doing in such a scorching sun. After spending good 15-20 minutes with us, the lizard ran away.
Satisfaction... that's the only feeling with which we got back into car and drove back home to reach around lunch time.
Overall, it was a quick, short trip. Both of us were happy. I was happy because I got what I hoped for. At home, Wifey was also happy, as I came back home in time.
SHARE SHARE SHARE