Mission: Ceropegia III - A star which shines during day time 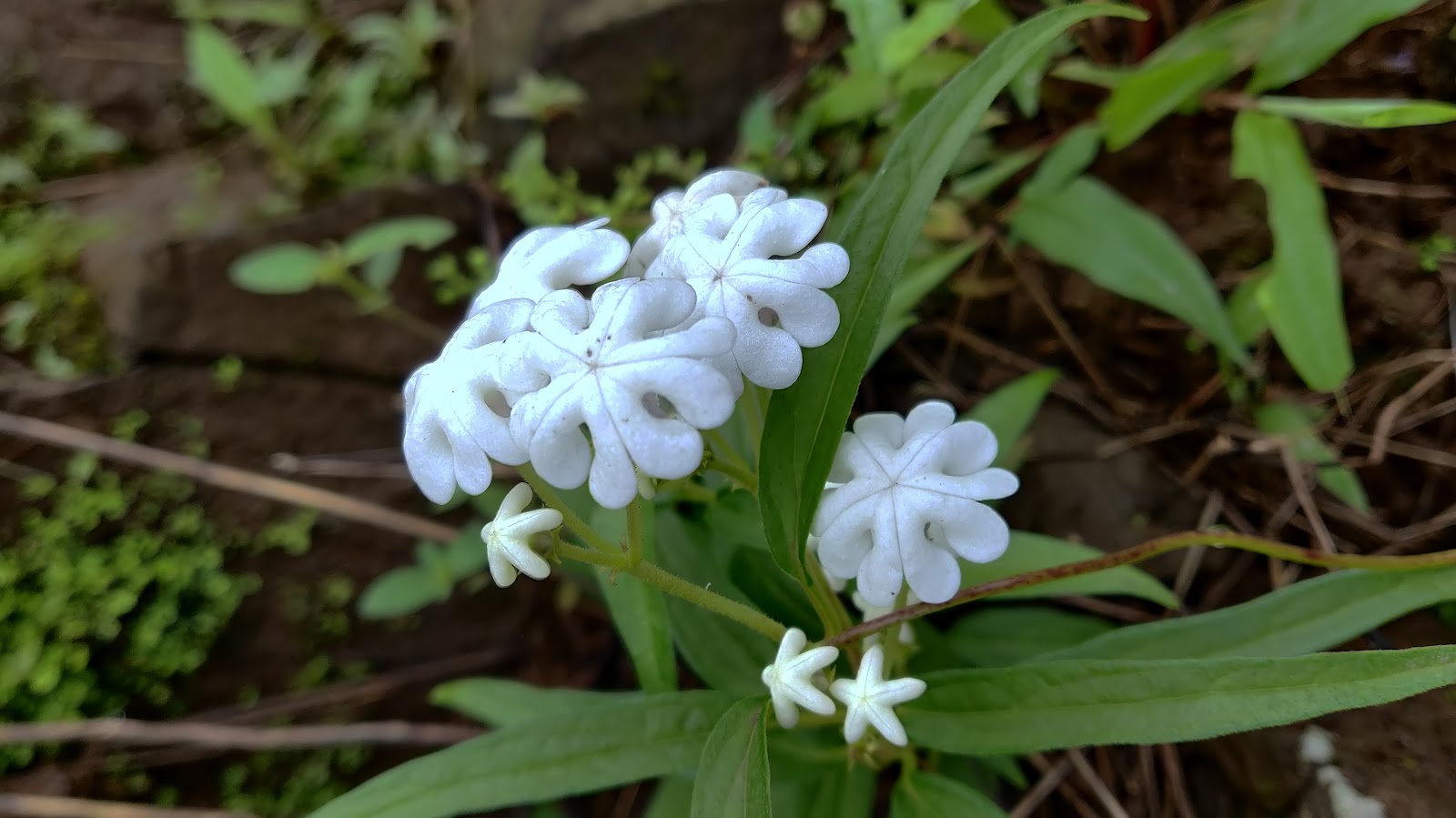 I have been trying to make a vlog covering my Ceropegia journey. But for some reason I failed to make a good progress on that. Perhaps, writing seems to be a better idea. So I am back to writing and that too about my favorite flower, Ceropegia.

Just before the monsoon started, as almost all the covid restrictions were lifted, I had very high hopes to cover most of my pending Ceropegia species this year. But I am sure you will agree that all that we hope is not what we get always. For some or the other reasons, I couldn't plan my Ceropegia trips even after monsoon settled in.

One good thing that happened last year was my younger son also started getting interest in Ceropegia. In fact, he also started keeping track of his lifer count. This year, we passed our Ceropegia infection to my nephew too. As I had no major plans for my Ceropegia lifers, I decided to help my 2 teens in improving their lifer counts.

In the last week of July, I decided to take kids (I know both of them don't like me calling them as kids anymore but still...) to one of the nearest & dearest location to every Puneite, which is none another than Sinhgad fort.

As per my knowledge, Sinhgad hosts about 5 species of Ceropegia, 4 of those are on the trek route and the last one is right at the top of the fort. Obviously, all 5 were on our wish list on that day. On the same day we planned a visit to fort, kids had a pre-mid exam result day in their school. Usually my kids prefer to stay away from school on such days. But on this occasion kids accepted the challenge to see their respective teachers first and then go for a trek. What a dedication!

No matter how much marks you score, being with school teachers and parents at the same time, is perhaps, one of the deadliest situations a child ever has to face. I can surely tell that from my own experience. Anyway, after not so pleasant time at school, we directly headed towards Sinhgad. We reached there somewhere around 1 in the afternoon. We had a lunch to begin with and then started the ascend.

Even though it was 1:30 the afternoon, since it was cloudy, it didn't really feel like. On the trek route, out of 4 expected species, we saw 3 i.e. C. oculata, C. maccannii and C. vincifolia. Unfortunately, we couldn't locate C. media. In fact, it took lot of time for me to spot even these 3 species, as the ones that I saw last time; those climbers were gone this year. I had to search a lot for new climbers. 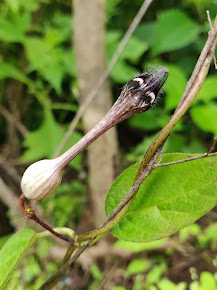 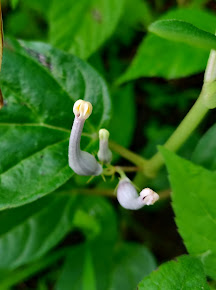 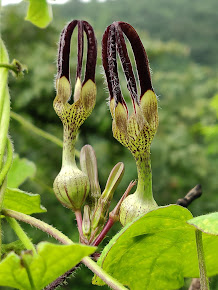 After around 1:30 hrs of climb, we reached the top. Luckily, we found C. sahyadrica at the same spot where I saw the same couple of years back. On our way back, I showed them 1 orchid named Habenaria rariflora too. With 4 species of Ceropegia and 1 orchid, kids were happy already. We gulped some quick snacks & few glasses of lemon juice and began our descend. While climbing down, I saw rather unexpected orchid named Habenaria gibsonii. 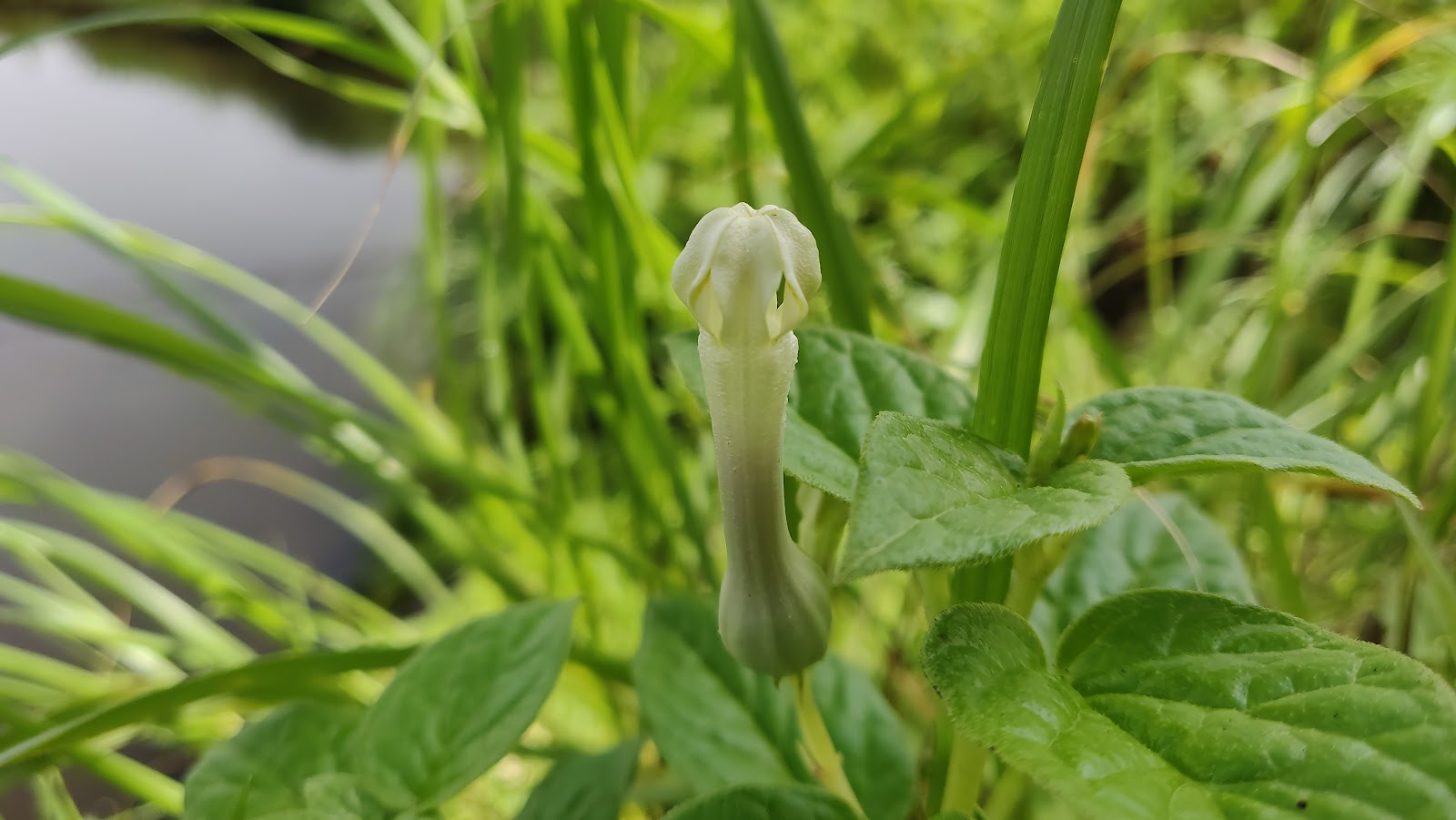 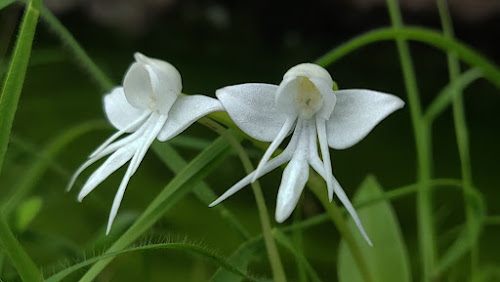 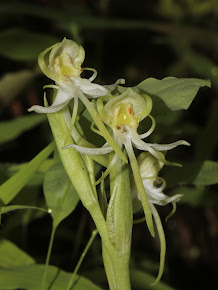 By the time we reached home, kids were really tired due to overtime work, first unpleasant school visit and then super exciting trek to Sinhgad.

Immediately after this trek, we started planning for the next one. But again, some unforeseen situations kept postponing our plans. Finally I managed to plan one last weekend. This time it was to visit Tamhini forest.

With the help of my friend, Ramdas Yenpure (one of the locals in Tamhini region), we planned this trek to see just 1 Ceropegia species; but a long pending on my own list.

We reached Adarwadi, Tamhini ghat at around 8:15am. Had a stomach-full of delicious breakfast and wasted no time in climbing up the hill, searching for Ceropegia huberi. Enroute, we saw many wild flowers but my eyes were not really ready to pay attention to any wild flower other than C. huberi, the one against which I wanted put a tick very badly. After climbing ¾th of the hill, finally we saw 1 climber with couple of withered flowers. Upon further searching in the vicinity, we found what we wanted, a bunch of climbers with lots of flowers. Mission accomplished! 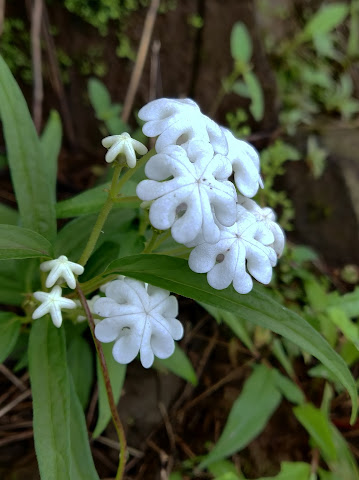 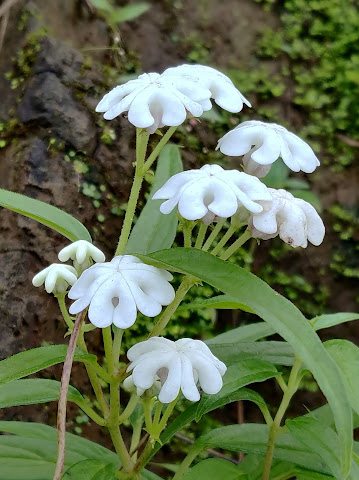 C. huberi, like many other species of Ceropegia, is Critically endangered species. The flower of this species has a strange looking shape as compared to other species. Typical Ceropegia flower has a longer tube with bulbous shape at the base of it, and petals fused together at the top forming a lantern like shape. In this one, if you look from a distance you will not see the tube. But this has a very tiny purplish tube almost making as if it is missing. Petals are fused at the top without leaving any gap forming a roof-like structure. If you see a flower from the top, you will see a perfect star. Hence for me, this flower is like a star which shines during day time. 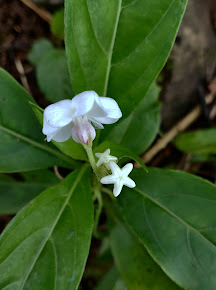 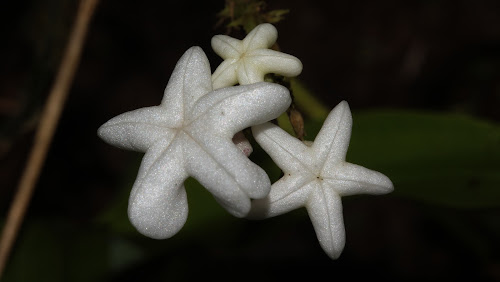 As the main wish list item got ticked, I started rewinding my memory to recall what all we saw until now. We saw many wild flowers but I could recall, 2 balsam species, 1 species each for Utricularia (an insectivorous plant), Begonia & Pinda only. The trek itself was slightly difficult. Actually, it was dangerously slippery on few occasions. But since the thirst of seeing C. huberi was so much that the level of difficulty of the trek only struck me while rewinding my memory.

Rather than climbing down, Ramdas suggested to continue climbing up & climb down from the other side of the hill. We did not spot anything very special but the walk through thick woods, listening to calls from n-number of birds itself was so special. Both me & my son had no complaints about no interesting sightings.

After walking for about 4-5 kms through the woods, a plateau, and crossing mulitple water streams, we reached Vinzai temple in Tamhini village. At one of the water streams, I asked my son to try & taste the water. Initially he was hesitant to do that but later when he tried, his expressions in this video said it all.

On the way, we did saw many other wild flowers and butterflies like Blue Oakleaf, Malabar Flat, Blue Mormon, etc. I don't have photos for each one of those but whatever I have I am putting here. 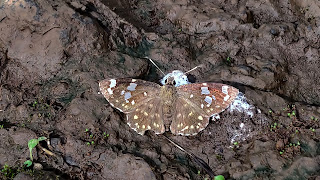 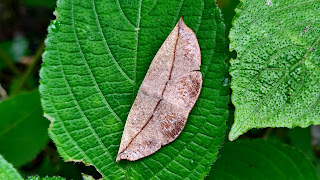 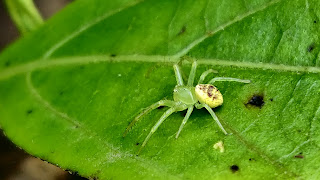 A view of Adarwadi region 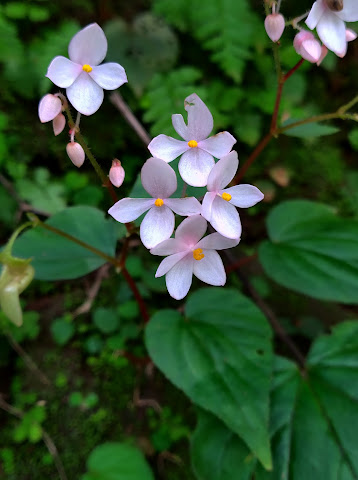 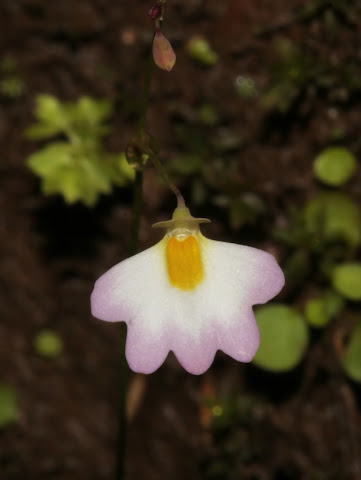 We were waiting for ST bus at Tamhini village bus stop, and luckily found one generous cab driver who was ready to give us a ride back to the same place from where we started, which was almost 17km away by road.

A special thanks to Ramdas who helped us for our wish list item and for a wonderful walk through the woods. That was the end to our excursion on that day and with refreshed minds we were back to cement jungle, obviously with a hope that we will soon return to the woods.
SHARE SHARE SHARE